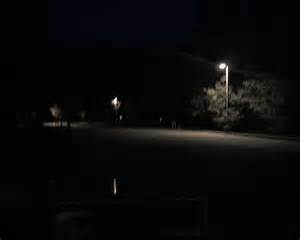 With the onset of fall, as darkness falls earlier come the obligatory posts about running safely when it’s dark outside. And the running websites, magazines, and  Facebook groups throw out the question – Do you bring your run inside when it gets dark outside? The answers fly fast and furious, ranging from the tame, “No, I hate the dreadmill,” to the self-righteous, “It’s only a run if you run it outside.”

Now, as the country is in the throes of the “polar vortex,” we are going through round 2 of runners’ self-righteousness. Once again, the running websites, magazines, and Facebook groups are pitting the “real runners” against the “hamsters on the hamster wheel.” The question takes the form of – It’s X degrees out today, did you run outside or did you break down and hit the treadmill? Once again, the answers fly left and right, ranging from the weather-immune, “Of course I ran outside, just threw on an extra layer,” to the Eeyore-esque, “Call it what it is, the dreadmill,” to the haters, “Yes, I ran on the dreadmill, hated every second of it, and kicked it when I was done.”

Every time these questions pop up or I read comments or posts about the “dreadmill” or people who proudly crow that they run outside exclusively no matter the conditions, I get a visceral reaction. “How dare they put down my beloved treadmill?” I ask myself. “Who are they to judge me or anyone else who runs on a treadmill?” I fume. “I’ve run marathons and half-marathons, too! Why are they bashing one of my training aids?” I rail inwardly.

I‘m not sure why I have such a strong reaction to those posts, but I do. I’ve actually not renewed a running magazine subscription because one of their editors – yes, an editor – mocked treadmill runners. Why would an editor of a running magazine put down anyone who is running, regardless of where they’re running? Of course, I was accused of not having a sense of humor but what people don’t understand is that the little jabs here and there start to add up and pretty soon, anyone who runs on a treadmill will start to think that they aren’t runners. I wouldn’t go so far as to call it treadmill bullying but if the shoe fits…

The treadmill vs. outdoor runner debate will never get as heated as the runner vs. jogger debate. Yes, I saw one running group had resurrected that old saw recently, too. Why will it never get as heated? I can think of 3 reasons:

Here’s the interesting thing to consider if you’re one of those outdoor-only runners – a run is a run is a run, no matter where you run it, no matter how fast you run it. We cheer the beginning runners who gasp their way around the block, but we denigrate the runners who have the mental toughness to slog out their runs on a treadmill. Why is that?

And if you’re one of those runners that thinks it’s cute to call it a dreadmill, consider this – if you name it, you own it. You call it a dreadmill and so you’ll dread every minute on it. You’ll never come to terms with how beneficial a treadmill can be. For a mother without childcare, a treadmill in the home could be a god-send. For a woman alone in a strange city, a treadmill in the hotel fitness center may be the only safe option. And the list goes on.

I’m a treadmill runner. I once ran a virtual half-marathon on my treadmill with nothing but music to keep me company. I learned my lesson after that run and now, the biggest television in the house is in the garage in front of my treadmill! But treadmill running has helped my focus, my mental toughness, and my consistency. Do I run outdoors? Of course I do! The fresh air, the sights and sounds, the social aspect of encountering other bikers and runners – what’s not to like? But at 5 o’clock in the morning when it’s still dark outside or after a long day at work, the treadmill is my friend.

In the meantime, wherever you run – Happy running!

Check-in was straightforward and simple. The volunteers knew what they were doing even if some of the participants didn’t.

I had pre-registered my parents and myself, but I didn’t know my brother would be home for the race so I didn’t register him. His registration process was smooth and simple, as well. Again, the volunteers knew what they were doing.

There was a young man dressed in a turkey costume and he was given a head start. The goal was to “catch” and overtake the turkey. The prize for the first person to beat the turkey to the finish line was – you guessed it! – a turkey. The race started on a downhill so at the starting gun, the field took off at a sprint after the turkey. Thank goodness they don’t have us run up that hill to finish!

This trail course was very hilly and had areas of sandy soil instead of hard-packed soil. It’s a tough course on a normal day and even tougher on a hot day.

After I finished, I ran/walked back through the course to find my parents. They were a little on the slow side, and I finally found them almost at the halfway mark. My mom always wears too many layers so I ended up carrying two of her sweatshirts for her! The good thing is that they weren’t the last ones to finish. A lot of walkers were struggling with the hills, the sandy soil, and the heat.

For a small event, the race organizers had a nice selection of munchies for before, during, and after the race. There was a best costume contest for the dogs – something to remember for next year!

Thumbs Up and Thumbs Down

Thumbs Up: My entire family – including Rambo – was with me for this race.

Thumbs Down: No age group prizes – I doubt that I qualified for one but I’m pretty sure my brother did. It would have been sweet for him to get an age group prize for his very first 5k. 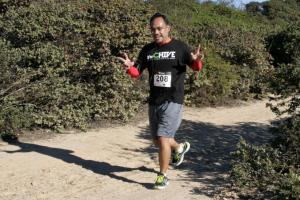 Thumbs Up: This was a dog-friendly race.

This is a tough little course. I would run this race again next year. I’m sure Rambo would enjoy the trail but I’m not sure if my parents will want to come along.

I managed to run a bit during the Thanksgiving break. Since I didn’t have to work, I managed to run outside a lot. Since I don’t listen to music when I’m running outside (only when I’m in a race!), my thoughts were darting here, there, and everywhere. Here are the ones I remembered when I got back home:

And the thought processor churns on…

And the next big race is…